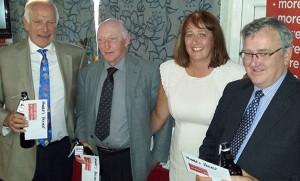 Against the stunning backdrop of Black Combe and the Lakeland hills, 13 teams participated in a Stableford competition to raise funds for St. Mary’s Hospice, Ulverston. RfM has had a long association with the hospice and has raised thousands of pounds for the charity over many years.

Everyone enjoyed a fantastic day of golf despite the typically changeable Cumbrian summer weather, none more so than the winning team of John Black, Andrew Moir, Steve Milby and Bill Barker, who lifted the coveted first prize. Runners Up were the team from Furness Heating Components.

A wonderful three course meal followed with the evening entertainment provided by the internationally renowned comedian/singer Norman Prince. Norman also hosted the Charity Auction on the night. The star prize was a fantastic week’s holiday to Antigua, kindly donated by Paul Newsham with Steve and Paula Knott the lucky winners.

The partners of RfM would like to thank all the teams for helping to make the day a success and the generosity of the following people and businesses who donated prizes for the auction: Mercedes Benz South Lakes, Furness Golf Club, Bentham Golf Club, Ulverston Golf Club, Dunnerholme Golf Club, Furness Heating Components, Howard Moss at Cumbria Cottages, Windermere Cruises, Barrow Rugby and Barrow AFC.