Barrow Rugby’s Annual Sponsors Evening is a major fundraising event for the club. This year’s event was held at Crooklands Garden Centre, Dalton in Furness on Friday 22nd January and our Managing partner, Elaine Harris and Farm Accounts and VAT Manager, Tracie Roberts went along to support the event in our capacity as main sponsors. A number of supporters, club officials and players also attended to show their support on the night. 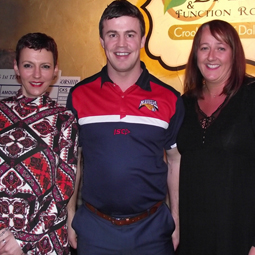 The event raised a fantastic £18,500 in pledges, surpassing the previous year’s figure by £1,500 with potentially more to come later in the season.

Elaine Harris said: “As the club’s accountants for over 80 years we are delighted that the financial position of the club has once again been helped tremendously by the funds raised by supporters of the club. We really can’t thank them enough.”

The partners of RfM have an excellent relationship with Barrow Rugby Club Chairman David Sharpe who described the generosity of supporters as ‘phenomenal’ and said, “£18,500 was pledged on the night. We have beaten last year’s amount and we have only sold half the games!

“More sponsorship should be heading the club’s way later in the year with games still to be arranged as the battle for promotion from League One heads for a Top 8 play-off as part of the new-look league structure for 2016. So, all in all, to have raised this amount is just fantastic. We knew it would be a good night and that figure proves it.

“The night was just a great success and we are really pleased with the turnout and the support received from everyone.”

New Raiders captain Oliver Wilkes attracted the biggest sponsorship of the night with £1,500 pledged by a group of die-hard fans who have supported the club over many years, home and away, through the good times and the bad times.

RfM’s sponsored player is, obviously, our very own Martin Aspinwall who signed with the club, and also joined us at our Ulverston office last autumn. We’re expecting great things from him – both on and off the field!

Barrow RLFC have high hopes for next season’s campaign and the funds raised through the sponsors night and pre-season friendlies will go a long way to helping their cause. Coach Paul Crarey has put together a squad mixed with experience and youth, with local amateur players signed up and being given the opportunity to shine on a bigger stage.

Experienced campaigners such as ex-GB international Martin, who has played at Super League level with Wigan, Huddersfield, Castleford, Hull FC and Leigh, will no doubt nurture the young talent along over the coming months.

As main sponsors of Barrow Rugby, RfM wish the team every success for the new campaign.