In April 2016, the Gift Aid declaration was changed by HMRC and, in certain circumstances, the taxpayer may be responsible for paying the tax reclaimed by the charity. This also applies to declarations that have already been signed. 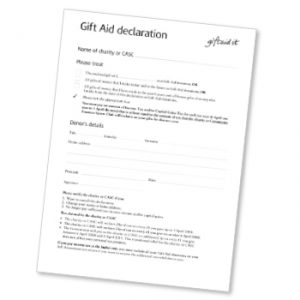 In the first year of the Gift Aid scheme charities benefited with £10 million of tax savings. 25 years later, in 2014/15, the savings were almost £1.2 billion.

A Gift Aid donation from an individual tax payer is deemed to be paid by that individual net of basic rate income tax. As the charity is exempt from paying tax on donations received, it can claim the tax back from HMRC (subject to meeting the detailed Gift Aid rules).

Changes to the Gift Aid declaration

Amendments have been made to the conditions of the scheme from time to time over the past 25 years and in April 2016, HMRC changed the Gift Aid declaration. The declaration is the means by which the taxpayer agrees that their donation comes within the scheme. This enables the tax reliefs to flow through to both the charity and the taxpayer.

The model Gift Aid declaration has been simplified and shortened. The new version clarifies that if an individual has not paid enough tax to cover the tax reclaimable by the charity, they (the taxpayer) are responsible for paying any difference to HMRC.

What charities need to do

The new style declarations should have been in use from 6 April 2016 except where:
•  an individual has signed an old style declaration form which covers multiple donations. They do not need to make a new declaration.
•  a charity holds stocks of printed declarations, ordered and printed before 21 October 2015. The charity may continue to use these.

A declaration by a donor can also be made verbally or online, e.g. on a charity’s website. Charities must ensure the updated format is used in every case.

Do you need to revoke your declarations?

Individuals who expect to pay little or no tax in 2016/17 should be made aware of the risks of signing new declarations and of having signed declaration forms covering multiple donations.

The standard wording on many declarations states: ‘I want to Gift Aid my donation of £__ and any donations I make in the future or have made in the past 4 years’. Here’s where it gets more complex. Various changes in personal tax rules in recent years – notably increases in the personal allowance and the introduction of a £1,000 savings allowance in 2016/17 – mean that many more individuals will not pay income tax in 2016/17.

So, for example, if a non-taxpaying individual makes £80 of donations this tax year, the charity(ies) will claim £20 and £20 will be due from the individual to HMRC. In such cases, it is important to get in touch with the charities to cancel the Gift Aid declarations. Cancelling will not affect Gift Aid donations already made but future donations will not be eligible.

Many higher or additional rate taxpayers will also have signed declarations but not claimed the difference between the rate they pay and basic rate on their donations. This can be done easily, either through a Self Assessment tax return or by asking HMRC to amend their tax code.