Home News Can my company get a tax deduction for a parking fine?

Nobody likes getting a parking fine. But when a ticket is the price you pay for providing an efficient service to your customers, surely you should be able to get a tax deduction? 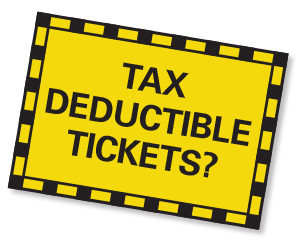 Here’s a possible scenario: Your business makes lots of deliveries to clients by van and drivers often have to park on double yellow lines as there is no available parking nearby. The result is quite a lot of Penalty Charge Notices (PCNs) issued by the local authority or the police. You instruct your drivers to avoid parking illegally but they often have no choice if they are to provide an efficient service to clients. Any chance of getting a tax deduction for the parking fines?

The short answer is no.

The long answer is also no – as G4S found out in a lengthy judgement released by a Tax Tribunal in April 2016.

The case for and against

Tax legislation contains no specific prohibition for the deduction of fines so, from time to time, the courts have had to decide whether any principles apply for deciding whether a tax deduction is available.

HMRC argued that the decision made in the Court of Appeal in Alexander von Glehn Ltd gave rise to a principle that:
• the purpose of a fine is to punish a taxpayer and
• the legislative policy behind imposing the fine would be diluted if tax relief were given.

G4S did not dispute the existence of this principle but claimed the PCNs they incurred for parking infringements were rather different in character to the penalty incurred in the von Glehn case. In that case, the company was fined in the First World War for exporting goods to enemy territory. The fine was £3,000 – a considerable sum at that time and clearly meant to punish. G4S claimed its parking fines were of a different character from the public policy issues arising from ‘trading with the enemy’.

The Tribunal did not agree with G4S. The purpose of the PCNs is to punish the taxpayer. The payment was at least in part to meet its obligation to pay the fines for breaking the law – rather than being incurred for the purposes of its trade.

Exceptions to the rule

Despite the ruling in this case, there are instances where a tax deduction for a parking fine is available:

• If PCNs are attached to an employee’s car (or handed to the employee) at the time of the offence, and the business pays the parking fine, a tax deduction will be given to the business. The employee is then taxable on the payment as employment income.

• If the parking ‘fine’ arises because a car has exceeded the paid-for time in a private car park, this is simply an excess charge payable under the terms of the contract made with the car park provider. This would be allowable if incurred ‘wholly and exclusively for the purposes of the trade’.

To discuss any tax or tax planning matters, please contact one of our offices or enquire online.