RfM regularly supports a number of local charities through donations and fundraising activities. Staff have played golf, dressed down, collected Christmas trees and even walked on fire for good causes. This time, we’re helping two friends of the firm to get ‘on their bike’ for Lancashire charity Baby Beat. 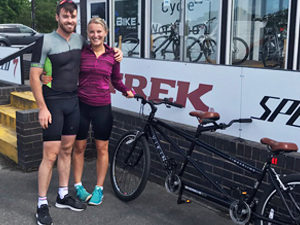 Sean and Laura with their new tandem

Sean Nicholls and girlfriend Laura Holmes, will be riding coast to coast from Whitehaven to Tynemouth in July – on a bicycle made for two!

Their chosen charity is The Baby Beat Appeal. Established in 1987, the appeal provides funding for the two Maternity Units and Neo Natal Unit associated with Lancashire Teaching Hospitals NHS Trust. It is with the charity’s support that these units can stay at the cutting edge of new developments.

Coast-to-coast challenge – on a tandem!

“Laura and I both have busy lives and decided we wanted a hobby that we could do together. I’ve always had a passion for cycling – in the past I’ve worked in Tenerife giving cycling tours – so getting out on our bikes seemed a good option,” explains Sean who works for Cobra Puma Golf.

“We soon started to think about setting a goal to train for. We wanted a challenge that would test both of us and that people would get behind so that we could raise money for charity.

“We thought doing the coast-to-coast ride on a tandem would be fun and a bit different. The route is 140 miles with challenging terrain but the tandem didn’t make it hard enough. We decided to push ourselves even further by doing the ride over two days instead of the usual three.”

Laura, who works as a staff nurse in intensive care, explained why they chose to support the Baby Beat Appeal. “Baby Beat has helped people very close to both of us and we know how beneficial the charity could be to bereaved families. Sean has also helped to raise money for the charity before by playing in charity golf days.”

Charity Manager, Karen Entwistle said, “We are enormously grateful to Sean, Laura and RfM Accountants for their generous and continued support.

“The funds raised will go towards one of our key projects which is our Little Ted’s Appeal. This was set up to provide soundproofing for the twelve delivery suites which are based at the Sharoe Green Maternity Unit at RPH.

“To date, just over £65,000 has been raised specifically for this project, however we still need an additional £40,000 to bring it to fruition. The work has to be carried out in stages as the Unit is very much a working delivery unit, with over 4600 births annually”.

Partners at several RfM offices have made contributions to purchase the tandem and ensure the pair have the necessary equipment to complete their challenge.

“I’m delighted to be involved in helping make Sean and Laura’s challenge possible,” said Peter Armer of RfM Morecambe & Lancaster. “The Baby Beat Appeal is such a great cause that’s really making a difference.”

“My first words when I was asked if I could support Sean and Laura were ‘count me in!’,” said Elaine Harris, Partner at RfM’s Ulverston and Barrow offices. “It would be an achievement to cycle the route on a standard bike… never mind a tandem! We wish them luck in raising lots of money for the Little Ted’s Appeal.”

Preparing for the challenge

Sean and Laura will set off from the water’s edge in Whitehaven on 29th July. They plan to touch the water again in Tynemouth at 5pm on the 30th. They will be posting a weekly video blog as they train and prepare for the ride. We will share this on the RfM Facebook page.

If you would like to sponsor Sean and Laura in support of Baby Beat, visit their JustGiving page or email awinstanley@rfm-more.co.uk