A team representing RfM Preston recently took to the fairways for the 7th annual Mark Lawrenson Baby Beat Golf Day. Our fab four certainly attracted attention from the crowd – and not just for their golfing skills! 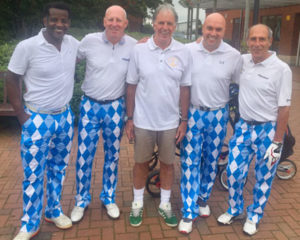 Next year we’ll get Mark Lawrenson a pair of snazzy golf pants!

Twenty teams of keen amateurs from across the region took part in the 7th Mark Lawrenson Baby Beat Golf Day on 4th September at Leyland Golf Club. The RfM team of Paul Newsham, Stephen Bayliss, Rob Flanagan and Steve Done did us all proud by coming a respectable 4th place.

When the question of team outfits came up, the obvious choice would have been our brand colours of red and grey. Instead, they went for, let’s say, a more ‘distinctive’ choice of golfing attire.

“We take part in the golf day each year primarily because we want to help support the Baby Beat Appeal. The day always raises lots of money and awareness of the fantastic work the charity does,” said Paul Newsham, Consultant at RfM Preston.

“The teams are all out to win but we decided not to take ourselves too seriously this year and sourced some wacky golf trousers from Royal & Awesome. It wasn’t our plan to distract the competition but we certainly turned some heads. We even won a prize for the best-dressed team which has never been awarded before!”

A fantastic day on the golf course was followed by a superb a gala dinner with food prepared by chef Vincent Slater, comedy entertainment and charity auction.

RfM Accountants donated three lots to the charity auction: a week at the Four Seasons golf resort in Quinta de Lago, Portugal and two signed Scotland football shirts. These items attracted bids of over £1,200 on the evening.

A total of over £11,000 was raised on the day for the Baby Beat Appeal. The charity raises funds to provide the Sharoe Green Maternity Unit at Royal Preston Hospital with state-of-the-art monitoring equipment and new technology to help save the lives of more babies. The charity also provides funding to support research and bereavement services.

Mark Lawrenson is a patron of the Baby Beat Appeal and has hosted the annual golf day since 2011.